Vapour blasting, also known as dustless blasting, uses a mixture of compressed air, media, and water vapour to clean surfaces. Wickens has become the standard for eco-conscious abrasive blasting using vapour dustless blasting technology, with the consumption of less than one quart of water per minute, mixed with your choice of abrasive, and operating pressures as low as 30 psi or as high as 130 psi.

Vapour blasting is ideal for:

Vapour blasting is a proven solution when it comes to surface prep for nuclear plants, bridges, large painting and coating contractors, waste treatment plants, non-ferrous metals, and many more. Vapour dustless blasting is also commonly used for cleaning purposes and restoration. Its non-aggressive technique ensures that only unwanted materials are removed and that surface components, including critical dimensions and shaping, remain unchanged. With vapour dustless blasting, you can minimize contaminants, reduce cleanup, and lower your disposal costs.

The Benefits of Vapour Blasting

Vapour dustless blasting works by using an abrasive process of mixing blast media with water to create a vapour liquid also known as slurry mix. The slurry mix is then pressurized in the power unit. Once the blast cleaning hose is primed with the slurry mix, blasting commences and is controlled by the operator using the blast nozzle. The blasting nozzle works on a convergence/divergence system that accelerates the wet vapour flow with pressures as low as 35 psi and as high as 125 psi. These variable settings are used to attenuate the blast stream for low or high aggression.

The system eliminates 95% of dust associated with dry media blasting systems such as sand blasting by encapsulating the media in water so that bounce-back of dust is virtually eliminated.

A key feature of vapour dustless blasting is its use of water. Water rings and water infusers are commonly used on dry blasting hoses in an attempt to lower dust levels, but these are less effective than vapour blasting slurry because the blast stream itself is still dry. More importantly, water infusers and rings use city water at 3 to 5 gallons per minute or 180 to 300 gallons per hour. This amount of water use can have a significant and detrimental impact on work sites and containments, whereas vapour blasting uses less than 18 gallons per hour, drying quickly with the media and facilitating an easier cleanup.

Another important feature of vapour dustless blasting is media consumption. Because the blasting is partly accomplished by the flow of water, media consumption is reduced. Depending on the application, consumption of media may drop to as low as 40% of dry blasting levels. For some jobs, this will mean a reduction of 2-3 tons of waste per week.

When executing vapour dustless blasting, the choice of abrasive is based on the level of aggression required for a given application. Some examples of media include:

Wickens Dry Ice Blasting uses vapour dustless blasting equipment that is fully portable and powered by a mobile air compressor. Effective blast hose lengths can reach up to 400 feet from the power unit.

These features combine to make vapour blasting an ideal tool for use in lead and asbestos abatement where the speed and effectiveness of blasting can be had without the dust hazards and high water level problems.

Vapour dustless blasting is a non-destructive cleaning method suitable for many applications: Mould can be a serious problem in any home, causing health issues and damaging the structure of the building. Cleaning after a fire with dry ice blasting ensures that soot and odour are eliminated safely. Learn how this environmentally friendly technique restored a utility room. There are many reasons why people choose to restore an old building. Historic buildings are an important way of keeping history alive, and they can also be a great source of pride for their communities. 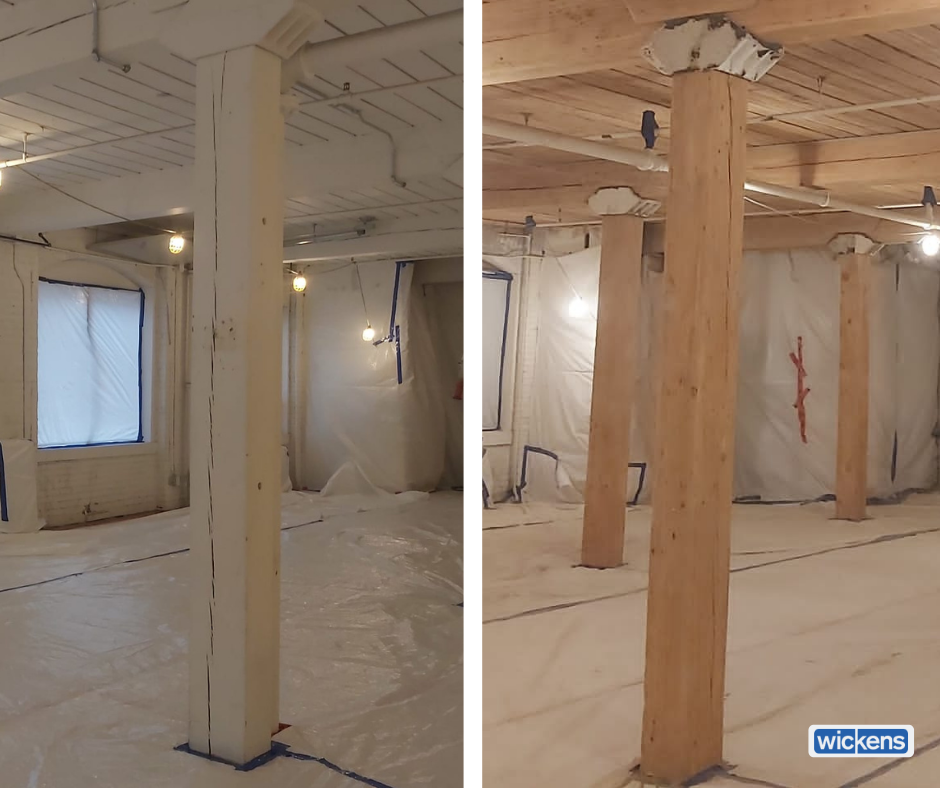 Wickens Dry Ice Blasting worked on a paint removal project at an old factory/warehouse in downtown Toronto that was being re-purposed into office spaces. Wickens Dry Ice Blasting assisted in the removal and disposal of lead paint in an Ontario brewery, keeping the establishment and its employees safe. Wickens Dry Ice Blasting worked on a fire restoration project on a 10-storey office building for a client in Ontario. This project required the use of vapour blasting which is an environmentally friendly dustless fire restoration method. Fires quickly spread from one part of the house to another and require non-destructive cleaning methods that are safe for the environment and effective on a wide variety of surface substrates. Many older industrial and commercial buildings have lead-based paint hazards. These hazards are a major issue, as employees in these buildings are susceptible to exposure to this toxic substance and may be at risk for progressive health problems if the lead paint is not removed safely. Economizers are prone to dirt and deposit buildup, which hinders them from accomplishing the very tasks they’re installed to do. That’s why an S.A.G.D. industry leader located in Alberta called the professionals at Wickens Dry Ice Blasting. Condo fire damage quickly spreads to nearby units as well as the building exterior, displacing residents from their homes until the building can be safely restored. Case Study: Historical Restoration and Preservation of the Kissing Bridge

Many tourists from different parts of the world come to visit Waterloo to experience the scenic beauty of the Covered Bridge. The professionals at Wickens were called in to perform dry Ice blasting, ensuring the bridge retains its pleasing interior. Thanks to dry ice blasting, cleaning this historical structure no longer carries the threat of damage it once did. When a fire leaves a business unable to function, it’s crucial to call in the experts to restore the damaged areas and get back to serving customers as quickly as possible. That’s why a restoration company called the professionals at Wickens after a Subway restaurant in Burlington experienced serious fire damage. The Municipality of Hamilton, Ontario faced a nightmare situation when mould was found in the attics of 90 residential townhouses. Wickens completed the three-month mould remediation project on time, under budget, and with very little disruption to the tenants. On the Canadian side of the Peace Bridge, visitors are greeted by the Canadian Plaza, which consists of a main administration building for processing arrivals. Wickens used dry ice blasting to clean the wooden structure without disrupting the high volumes of visitor traffic. Managers of an ice arena in St. Catharine’s, Ontario discovered significant mould growth on the ceiling of the building. Wickens Dry Ice Blasting was able to clean the mould residue and mould spores from the ceiling and support structures within two weeks. Marking the entrance to the Niagara River is a lighthouse that once guided boats and ships arriving via Lake Ontario. Recently, Fisheries and Oceans Canada decided it was necessary to refurbish the lighthouse and remove the lead paint that had been applied years ago before federal regulations came into effect. For builders in Northern Ontario, winter came all too quickly while constructing a luxury condo building. With snow and wet conditions, mould developed on the building materials and spread throughout the building. Wickens quickly mobilized a team of trained technicians to begin the mould remediation process. A three-story office building in South Western Ontario had areas of exposed brick on all levels that had been painted with asbestos-containing paint. With extensive experience, specialized processes, and trained technicians, Wickens Dry Ice Blasting was able to safely and quickly remove the asbestos.